Everyone loves to win something at some point in their lives. Winning the Ohipopo Digital quiz Contest(ODCQ) was a dream to many contestants across the country. It was with great pleasure that the Ohipopo team awarded the winner of the ever first edition of the Ohipopo digital Quiz Contest, Njie Carl Namange.

This First Edition of the contest was announced on Monday the 3rd of February Live on the Ohipopo.org Facebook page. It ran from the 3rd to the 16th of February.  The lessons chosen for the contest were;

The rules for the contest were as follows:

Over 100 contestants took part in this competition. In the end, the scores of all the contestants were looked at. The three highest scores were shortlisted. These where;

The result was announced live on the Ohipopo.org Facebook page on the 17th of Feb,2020 at 6 pm. The winners were called on phone live on Facebook and informed of their success.

It was an emotional event filled with happiness, celebration, and encouragement. 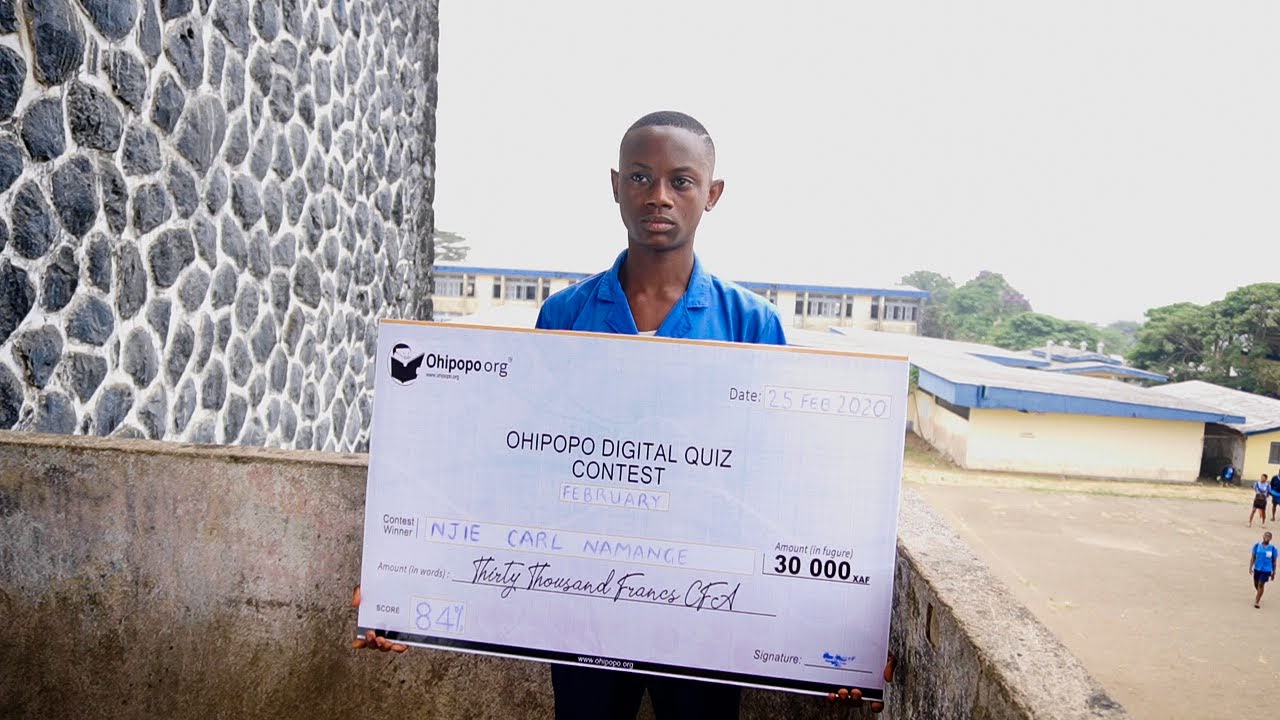 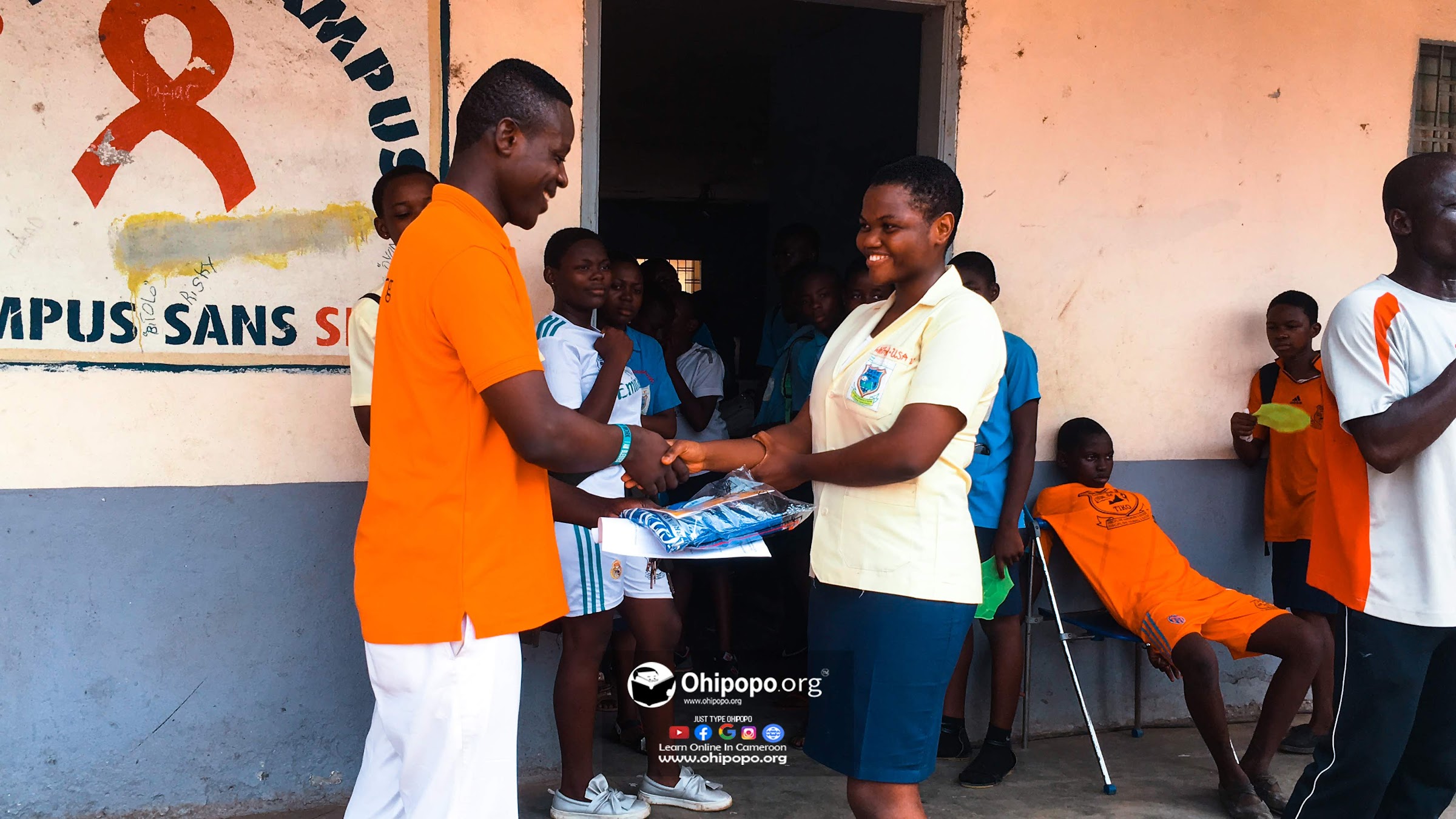 Nkengafac Winifred Defang came in second place. She is a student of Government Bilingual High School Tiko. She studies A2 – Economics, Geography, and History.  ” I feel really happy to come in second place in the competition, but I’m a little bit disappointed because I wanted to be the overall winner….. ” Wini Light told the Ohipopo team as they handed her prize her at the GBHS Tiko ground during their Mother’s tongue school celebration. She was proud to stand out in front of everyone and labeled smart winner in the second place of the famous ODCQ. She expressed her gratitude to the entire Ohipopo team for providing wonderful lessons to students with a classroom experience and at very affordable prices. ” I never loved Economics but studying it at ohipopo.org was really a great experience for me. I was able to understand “Production” really well…….” Wini Light said.

She was handed an Ohipopo T-shirt carrying Ohipopo Digital Quiz Contest February edition. She also was handed an envelope carrying a code to get one Ohipopo lesson for free. In the end, She thanked ohipopo for the prize and promised to go in for the March edition of the ODCQ and hopefully be the next winner. On the day the results were announced Live on Facebook, The winner Njie Carl Namange was called on phone. His reaction was amazing. You could feel the joy from the other end of the line as he screamed wow wow!!! He had to take some time to let the news settle in. He did not just win the third prize, but he also won the first prize. When he was asked, he told the Ohipopo presenter that He was a lower sixth student from Billingual Grammar School Molyko Buea. He offers S1- Biology, Chemistry, Physics, Math and Further Math.

On Tuesday the 25th of February, a team from Ohipopo visited his school again and his prizes were handed to him.

He was also handed the prize for the third place. This was an Ohipopo T-Shirt.

It was indeed a bonanza of gifts for Njie Carl as the winner of the ODQC. He mentioned that he was not even expecting all those gifts because he went to Ohipopo just to study. He expressed his love for the platform as he really enjoyed the lessons he took which were ordinary level Maths matrices and Advanced level Maths Complex numbers. He says the lessons were nothing less than one in a regular class with a great teacher. He also mentioned that the customer service was great. They were always there for him when he needed help. The technical team also provided great assistance to him. He encouraged other students to study with Ohipopo and the says he knows that Ohipopo will help him get better results in school and at the GCE Examinations.

The reactions from the winners were so amazing. They all enjoyed using the ohipopo.org platform. Every student will definitely enjoy using this platform because it contains lessons with great video lectures, very comprehensive notes, and GCE standard MCQ quiz to test students’ understanding.

Njie Carl Namage was the proud winner of the ODQC February edition. You too can be a winner by partaking in the March Edition of the contest. it started on the 19th of February and it will run till the 15th of March 2020. Visit the website www.ohipopo.org. and take part in the quiz.

My name is Eyong Tanyi Enow Ann, I was born on the 19th of March 1994 in a small village called "Eyumojock". I am a certified Medical Laboratory Scientist from the University of Buea and an online certified Digital Marketer with 3 years of experience. I am currently a co-founder of Ohipopo.org which is an online learning site in Cameroon. When i have free time, I love to cook, sing and play piano.

The Best Time To Study Online Is Now With Ohipopo.org

As Ethereum approaches its long-awaited transition to proof of stake, developers have launched the mainnet’s first “shadow fork”. Its purpose is to stress-test existing assumptions about testnests and the mainnet. Preparing for the Merge According to Ethereum Foundation Developer Parithosh …

Top 6 Reasons Why You Should Study With Ohipopo.org

The Best Time To Study Online Is Now With Ohipopo.org

Not a member yet? Register now

Please on the number field, start with your phone number and end with @ohipopo.org

Are you a member? Login now